Hi, my name is Dr Carmen Ebner and I am a sociolinguist. In particular, I study language variation and change, and focus on language ideologies, prescriptivism and attitudes towards usage problems. At this point, I might have lost some of you. No matter whether you’re a linguist or not. Usage problems? Prescriptivism? Really? Is that even genuine research? Don’t worry. This blog post isn’t a rant. But let me give you a bit more background on usage problems and on what the real problem is.

While some of you might have heard of split infinitives, dangling participles, and double negatives, others might only have a vague idea of what these terms mean. Some of you might even have strong opinions on their acceptability. Opinions and knowledge aside, all three of these are prime examples of linguistic features whose standardness has long been disputed. In scientific literature, the split infinitive and its likes are often referred to as usage problems¹. But mind, not every grammar lapse, gaffe and mishap is part of this somewhat mysterious category. What then are usage problems?

Essential criteria used to characterise usage problems are their widespread and fairly frequent use as well as being subject to public debate. While these three criteria proposed by Ilson are useful to an extent, they do not go far enough in circumscribing what constitutes a usage problem and what not. To give you an example which you have likely encountered if not even produced yourself, consider langauge.

Doing a quick google and corpus search, it seems as if this spelling variant of language is indeed fairly widespread and frequent. Public discussion seems to predominantly take the shape of social media commentary and entries in online wiktionaries. Applying Ilson’s criteria, langauge could thus be classed a usage problem as all three criteria are met.

Now let’s compare this to a slightly different linguistic feature: would of. This feature includes the use of of in place of have in modal verb constructions such as would/could/should have. Due to the similarity of the two words – ‘ve and of – when spoken, the use of would of has unsurprisingly become frequent and widespread in writing as well. The main difference between the two examples I am using here lies in the public discussion. While public discussions on langauge often stress the ordinariness of this misspelling and convey a humorous note, thus lessening the perceived severity of this misspelling, the discourse evolving around would of is strikingly different and without question more negative. Modal verb constructions such as would of seem to be condemned as outright incorrect simply because of is also a preposition. 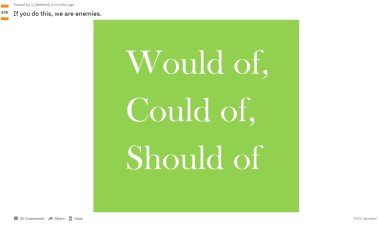 Reddit user: “If you do this, we are enemies”

Without doubt public discussion plays a vital role in the perception of stigmatised and alleged nonstandard linguistic features and thus also in the circumscription of this group of features. There is a particular subgroup of usage problems which has acquired some notoriety or almost mythological status over the course of time. The split infinitive is part of this subgroup and is often referred to as an old chestnut or a Zombie rule, as aptly described by Arnold Zwicky. Having gained some prominence among the general public, Zombie rules are recurring components in advice literature on how to use English properly. While there are some excellent linguistic contributions² to this genre, these efforts are, unfortunately, few and far between. The lack of such studies debunking usage myths and investigating the perceptions and attitudes of the general public facilitates and perpetuates the status of linguistic features as stigmatised, incorrect, improper and nonstandard linguistic features. It is not difficult to see a link between the usage guide market being dominated by often self-appointed language experts and guardians of the English language and apparently undying Zombie rules finding their way back to the speech community.

So, what’s the problem? The problem at hand is not the existence of alleged usage problems such as the split infinitive, dangling participles, double negatives or would of. The issue lies more with the mostly half-hearted engagement and treatment of prescriptivism by linguists. In the past six years, attitudes towards stigmatised linguistic features such as the ones mentioned in this blog post have been the centre of my research focus and interests. Even though every linguist (I would hedge this with almost, but I am sure it’s every) has an opinion on prescriptivism and usage problems, the subject is still widely treated like a pariah in the discipline³. Every now and again, I earn somewhat belittling smiles and raised eyebrows from colleagues when sharing my research interests, as if studying prescriptivism is like committing high treason against linguistics. As if this was only a legitimate pastime for an armchair grammarian. Stubborn as I am, I refuse to accept this. To research language and, especially as a sociolinguist, how it is used by its speakers and works in society are fundamentals on which linguistics is based. After all, shouldn’t linguists describe all aspects of language and discourse?

³ Don’t get me wrong, there are wonderful linguists out there working on prescriptivism in different varieties.

One might think that reading too many articles on language pedantry and disputed usage items would, sooner or later, take its toll. But surprisingly, studying prescriptivism and descriptivism has so far not only caused the occasional head shaking and nodding, but also giggles and fits of laughter. To share some of my findings with you, I have put together a small collection of links which I hope you enjoy as much as I do.

Finding good grammar jokes is not always easy. But here are two good ones:

The past, the present, and the future walked into a bar. It was tense.

That do you say when you are comforting a grammar nazi?   –    There, their, they’re.

There are plenty of funny cartoons and memes on punctuation, grammar, and usage items on the internet. My colleague Morana Lukac has created a Pintrest board with some graphical highlights such as the ones below. 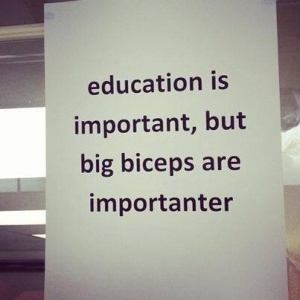 Similar graphics can be found on the facebook page of Grammarly, a grammar checker. Mocking signs such as the one below can be done in such a well-considered and accomplished manner.

For those of you, who are familiar with The Elements of Style by William Strunk Jr. and E.B. White, the following video is a must.

If you want to find out, whether you lean towards prescriptivism or descriptivism, you can take a test. But beware: take it with a pinch of salt!

As you can see, the prescriptivism and descriptivism debate bears a huge potential to find humour and there is more to discover.