What do these features have in common? That is something Carmen Ebner and I are going to figure out in the article we are writing for the online Oxford Research Encyclopedia of Linguistics. For this article, we decided to focus on these four usage problems (selected from among the 55 items in Mittins et al.’s Attitudes to English Usage, 1970). My reason for choosing try and may be found elsewhere in this blog, and the placement of only was part of a very early survey I did in the course of the Bridging the Unbridgeable project. Carmen has been interested in the split infinitive from the beginning of her research project (it is a really good example to show how prescriptivsm works or doesn’t work, and there are several posts in this blog that deal with split infinitives). Carmen’s interest in the dangling participle is particularly clear from…

If you can spare us a little of your time, and if you haven’t done so already, please take our fifth usage poll. If you do so, we will be able to study the difference in acceptability compared between when Mittins et al. first did the survey in the late 1960s and today. We’ve had a reasonable amount of response for the other surveys, but not for this one. Even lower results were found for usage poll 7. And perhaps, though this would be asking a lot of you, we know, usage polls 8, 9 and 10 as well? Five sentences in each poll only! For the full list, look here in the banner. Thank you very much indeed.

Since I am particularly interested in the media’s role in the later stages of the standardisation process of English, I would like to invite you to participate in a brief survey which also serves as a starting point for a bigger investigation of this subject matter.

The aim of this survey is to identify current attitudes towards the language use of the media. While the majority of questions deals with traditional print media in Great Britain, especially national daily newspapers, a few general questions involve also broadcast media (TV and radio) and digital media (Twitter, blogs, etc.).  The survey, which will take roughly 10 minutes, is available here and your participation is, of course, anonymous and highly appreciated.

What is wrong with the word said? Personally, I do have nothing against this very useful verb. But as it turns out, some teachers in the US are actively encouraging their students to not make use of it.

Gabriel Roth describes this trend in his Lexicon Valley blog post “Teachers! Please Do Not Make Your Students Use Synonyms for Said,” I Blurted and states examples of teachers including said on lists of banned words or providing pupils with lists of alternatives to use instead. One of the leading proponents of this trend is Leilen Shelton, middle school teacher and author of the book Banishing Boring Words which displays a school boy thinking of words to use instead of said on its cover.  According to Roth, the problem lies in the application of this banning-said approach. While finding useful synonyms and enriching the pupils’ vocabulary are sensible objectives, Roth cautions against…

Source: He said, she said or he admitted, she boasted?

After Grammar Girl’s Top 10 Grammar Myths in 2010 and the Guardian’s 10 grammar rules you can forget three years later, linguist and author Arika Okrent joins the usage problem shortlisting club with her 4 Fake Grammar Rules You Don’t Need to Worry About.

Having read quite a substantial amount about usage problems and debunked grammar myths in the past three years, I have become somewhat used to seeing those so-called old-chestnuts pop up every now and again and being declared no longer problematic. Do not worry about the split infinitive! It’s okay to say to boldly go. This is the sort of English up with which you will not put. No wait. You will not put up with. While the split infinitive rule and the rule against preposition stranding can be found on all three lists, Okrent debunks two further, so far excluded myths on her list which attracted my attention…

We have dealt with numerous language issues such as the oddly misplaced apostrophe, the dangling participle and the new “like” on our blog, but what interests me in particular are the social factors that may or may not pull the strings behind the scene. Does education influence your attitudes towards the acceptability of the often preceived misuse of literally? Do younger people, described by Naomi S. Baron as the Whatever Generation, really accept anything when it comes to language usage? What role does gender play?

Gretchen McCulloch wrote an interesting piece on the role of the latter in language change arguing that young women “are the real language disruptors”. Sociolinguistics studies, such as the ones conducted by William Labov, have shown that women are the driving force behind linguistic innovation. Be it uptalk or the use of like. Women have often been blamed for these language disruptions; a term… Today is National Grammar Day in the US and to celebrate this joyful occasion, Grammarly, a company providing a spell checker and grammar checker with the same title, has published a quiz: What kind of grammar nerd are you?

It contains questions on usage problems, such as preposition stranding and the split infinitive, as well as on your attitudes towards textspeak and other usage conventions. For those of you who always wanted to know whether you are a Pedant’s Grammarian or Enlightened Grammarian, simply take the quiz and find it out! 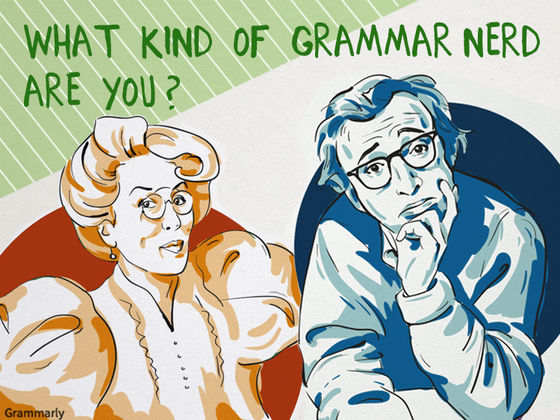 I have to admit that reading usage guides can get somewhat boring. Their authors, most of them prescriptivists and literally old-school, frequently use a similar set of usage problems discussing them in a similar manner and expressing similar attitudes. If you read one prescriptive usage guide, your second will most probably not rock your world. On my visit to Oxford last week, I discovered however a rather peculiar usage guide, whose title immediately caught my attention: Accidents will happen: The non-pedantic guide to English usage.

Written by Oliver Kamm, leader writer and columnist for The Times, this usage guide was only recently published by Weidenfeld & Nicolson and thus dethrones Steven Pinker’s Sense of Style as the most recent usage guide. What intrigued me was Kamm’s point of view on language, which definitely struck a chord with me. He emphasises how native speakers of English need to be…